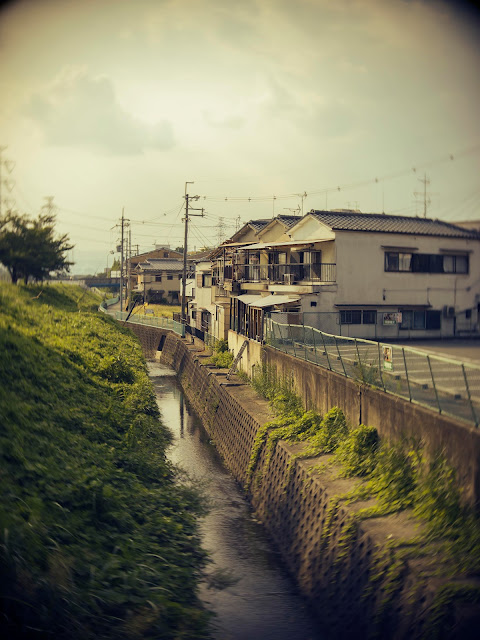 Though I know I've hardly scratched the surface of what it's actually like to live here, it seems really nice. To me, every little alleyway is picturesque in some way and despite what you hear, I don't think it's really that expensive. At least with 100yen equaling $1, things honestly seem cheap to me. I guess it also has to do with the fact that some things in America really suck. For example, in Japan you can get a phone with unlimited texting for two months, no contract for $60. Good luck finding that in America. I've heard foreigners living here get tired of the fact that Japanese people expect very little of them, but so far I've truly enjoyed seeing how delighted people are when they see that I can speak a reasonable amount of Japanese. I'm sure I'll eventually find things I really don't like, but so far it's been absolutely wonderful.
Posted by Unknown at 12:37 AM 1 comment:

Everything is Just Nice. 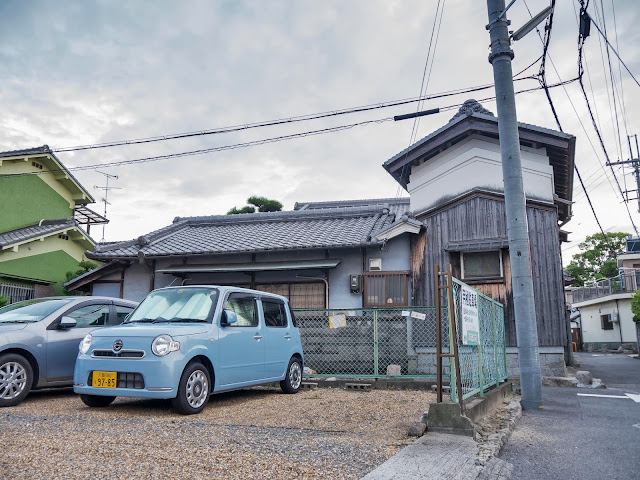 The main thing I'm noticing as I walk around Hirakata city is that everything is just nice. The houses, the cars, the roads. Some things are a little worse for wear, but in an aesthetically pleasing way. Apparently people in Tokyo say that Osaka is dirty, but compared to big American cities, it's spotless.

I can tell I'm going to be taking a lot of car photos. Today I saw a Nissan Skyline r34 sedan. I didn't even know those existed!

Posted by Unknown at 3:08 AM No comments: 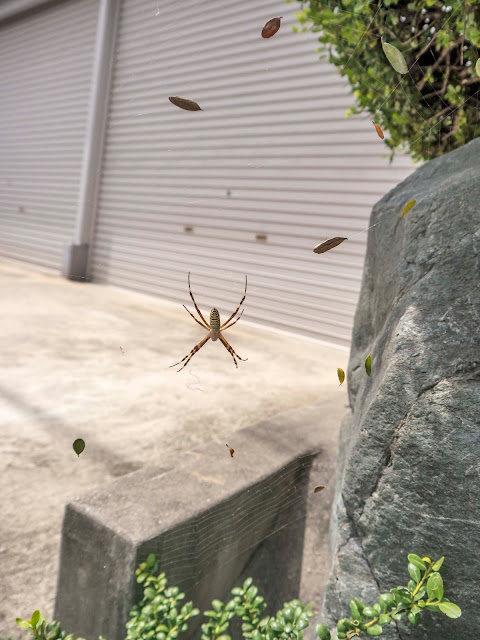 I didn't know the bugs in Japan were so huge! I've seen several spiders like this around town and a friend of mine said they had one in their room. Also, there are cicadas everywhere. They are unbelievably loud. I'll live. I guess.
Posted by Unknown at 12:51 AM No comments: 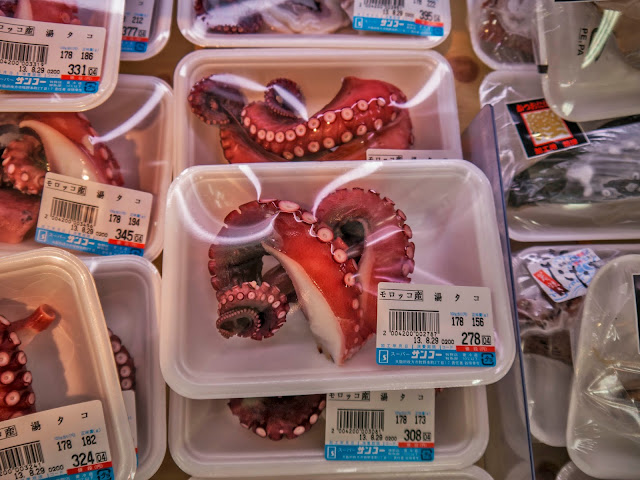 After 2 days in Japan, I finally found tentacles. The importance of this should be obvious.

One of the first things I noticed upon arriving in Japan is how many cool cars there are! For one thing there are tons of tiny cube cars which I think are really cool. Also I actually saw several cars that are Japan-only that I've only seen in racing games. For those who might be familiar, I saw a Nissan Slivia, and a Nissan GTR-R34. I even saw a dekotora!

Another thing I was surprised by was the fact that there are a lot of mini coopers in Japan, who knew? 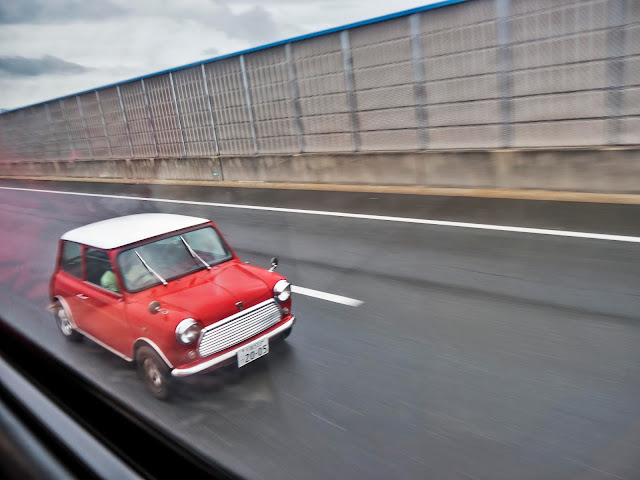 Alright, so first the obvious: I finally made it to Japan. From the time I first saw Inuyasha late at night with my cousin over a decade ago, I was basically destined to come here at some point. Here's my story:

On Thursday, August 22nd, my parents took me to the Minneapolis airport to depart on my journey. I had a really cheap ticket with 2 layovers. A 1 hour layover in Chicago and a 12 hour layover in San Francisco.
After getting through security I found my gate and settled down to wait for my flight to Chicago which was supposed to arrive in about an hour. Soon after I settled in I learned that my flight would be delayed 3 hours making it impossible to catch my connecting flight to San Francisco. I went up to the United Airlines desk and asked the representative what she could do about my situation. She said that it was really strange to get to San Francisco through Chicago (That's what you get for using a sketchy booking agency). She was able to get me a direct flight to San Francisco in a Economy Plus seat no less! This direct flight got me to San Francisco at 9:00pm, just in time to wait 14 hours for my flight to Osaka. I didn't sleep at all during this time, but I didn't feel too bad. I read a quarter of "The Emotional Life of Your Brain" by Richard Davidson which my mom had given me to pass the time. I went to my gate at around 9:00am to see if there were any likely Kansai Gaidai students there. When I got there, I was the only one. I had wandered around the whole airport at this point so I decided just to stay put. After about a half hour a girl showed up and pulled out a laptop. From time to time I would glance over at her screen hoping to find clues as to whether or not she might be a KGU student. After checking her email (or something, I wasn't watching THAT closely) she started watching an episode of Trigun and at this point I was pretty sure she was probably a KGU student. I walked over and asked her, and indeed she was! We talked for a while and as other young adults came to the gate we asked them if they were going to Kansai Gaidai. Many of them said yes and by the time our plane arrived there were about 15 of us.
On the plane I was in an isle seat. To my right were a Japanese man and his wife and to my left across the isle was a Kansai Gaidai student. This was going to be a 12 hour flight and with no hope of sleeping (I can't sleep in a chair) I was going to have to keep myself busy. For the first hour I talked to the KGU student about his plans and what had brought him to Japan. After that I pulled out, "The Emotional Life of Your Brain" and read to about half-way. At this point the stewardesses brought out our first meal. It wasn't too bad. After the meal I decided to break the ice with the Japanese man next to me. He had been talking pleasantly with his wife up to this point and seemed like a nice guy. I asked him, in Japanese, where he was going and what had brought him to America. I also mentioned that I was a Japanese language student at KGU and that there were several of us on the plane. We talked for quite a while about various things which took up an hour or so. After a lull in conversation, he pulled out a book and I figured I aught to do the same. This was 6 hours into the flight and I was finally getting a sense of just how long a 12 hour flight is. It took me 4 hours to finish "The Emotional Life of Your Brain." From this and the fact I hadn't slept in 34 hours or so, I was pretty mentally exhausted. The book had talked a lot about various meditation methods, so for the remainder of the flight I meditated which was actually extremely relaxing.
We landed in Osaka around 2:20pm and took a rather long shuttle bus ride to the dorms where we would stay for orientation week. It was during this ride that I realized that I was really in Japan. Osaka is a major industrial city so as we drove down the highway we saw numerous factories from Japanese companies both famous and obscure. My personal favorite: The Kewpie Factory 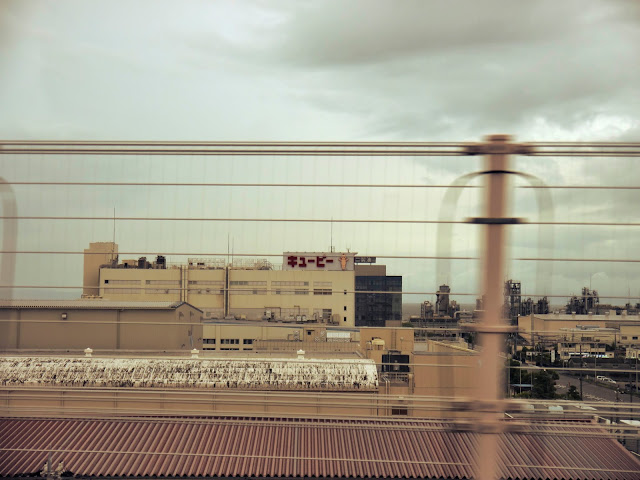 I didn't end up taking many pictures during my trip, or at least not many of them turned out.

After settling into the dorm I went down to one of the common areas to see what people were up to. There were a few people I recognized from San Francisco and many others I did not. As it often goes with a large group of people who don't know each other, but have a common interest we all became fast friends. Though we were all dead tired, it was still daytime in Osaka and with no orientation activities planned for several days we decided to go exploring. In a group of about 7 people, we wandered out into the city following main roads so we wouldn't get lost. Other groups of students took off in different directions. Our group found a really cute okonomiyaki shop and a 100 yen store. When we returned to the dorm we shared our findings with the other groups. Apparently there was an awesome electronics store and many other things in the direction we hadn't gone. Around 10:00pm the first night in Japan, I finally got to sleep.
The next day was Sunday and again there was nothing planned. I joined various other groups to explore more parts of the city. I would have taken pictures, but it was raining heavily for most of the day. I was able to buy an umbrella for 100 yen.
Now it's Monday, and from now on Orientation activities will start ramping up. Hopefully I will get more pictures and have more to post about in the near future.