With so many people using the train system in Japan, it's inevitable that at some point someone is going to fall of the platform and land on the train tracks. Assuming this happens there are several structures in place to keep you safe.

First is a row of steps going along the platform to help you climb back up before the train comes. Second, if you can't make it to one of the steps, there are alcoves marked in yellow along the platform where you can get out of the way of the train. 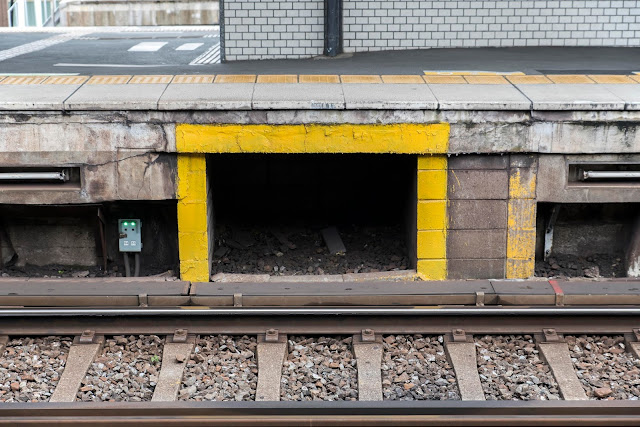 I hope I never have to use either of these, but it's good to know they're there just in case.
Posted by Unknown at 4:00 AM No comments:

While walking home from the train station the other day I came across this tiny torii [link]
on a path going under a bridge. There were 6 similar torri lining both sides of the path. I assumed they were for good luck or something similarly vague until I came across a sign describing their purpose. The sign had a picture of a torii and said "Peeing standing up forbidden" Apparently the torri are supposed to discourage people from peeing under this bridge. I mean, you wouldn't pee on a holy symbol would you? 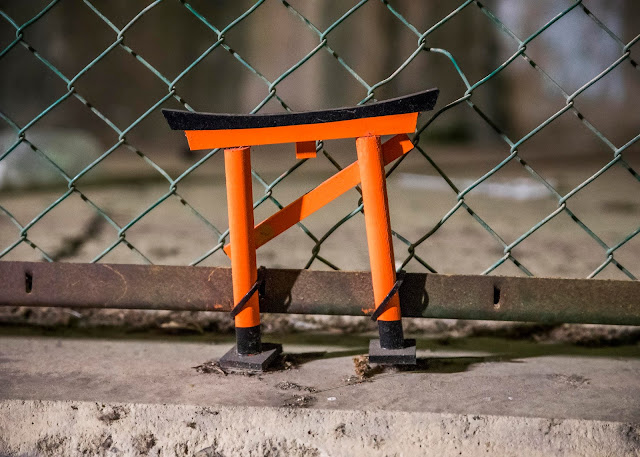 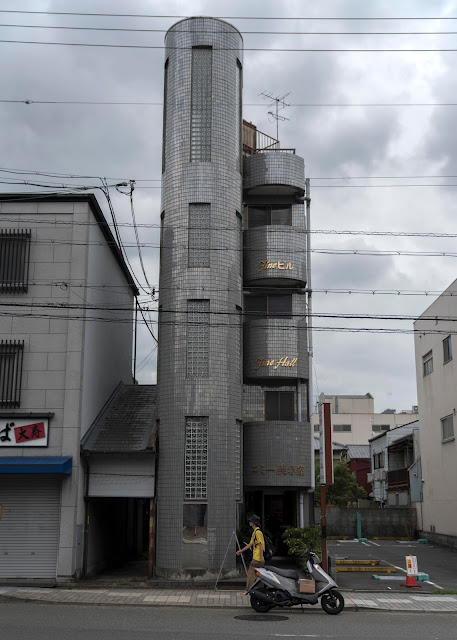 I came across another amazingly tall and thin building. This building isn't located in a particularly dense part of the city. They've built what looks like a 3 unit apartment building in a space about the size of a large shed. Creative designs like this can be found in the most unassuming places. There are certainly many cookie cutter designs as well, but there is a good balance.
Posted by Unknown at 4:00 AM No comments:

The last time I was in Japan, I took a picture of this handmade street sign meant to warn drivers that there are potentially children playing in the area. I remarked on the irony of the fact that the sign appeared to have been hit by a car. 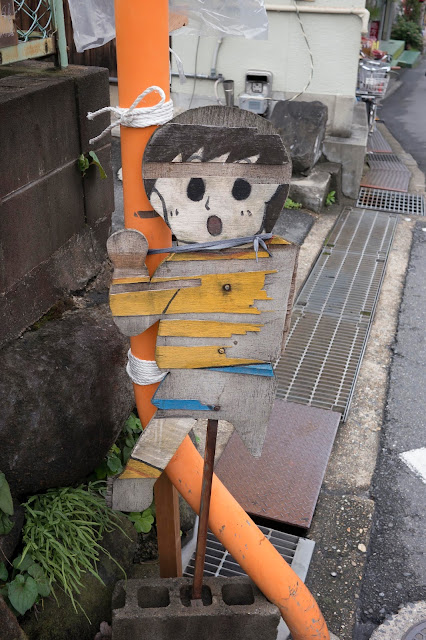 3 years later I walked down the same street and it appears that they have replaced the sign. I'm not sure how I feel about the art direction on this new sign, but at least the child is in one piece. 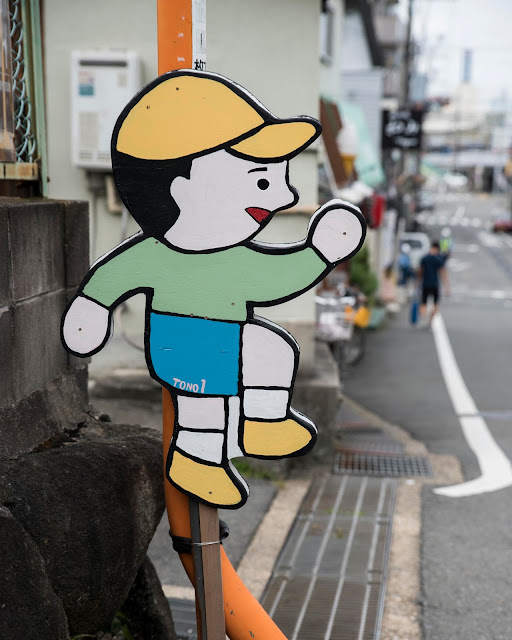 I went out with a group of friends to what my friend called a "Retro Japanese" restaurant. I was imagining it would be a Japanese interpretation of a '50s American diner, but I was quite wrong. It was a recreation of a restaurant from 1950s Japan. 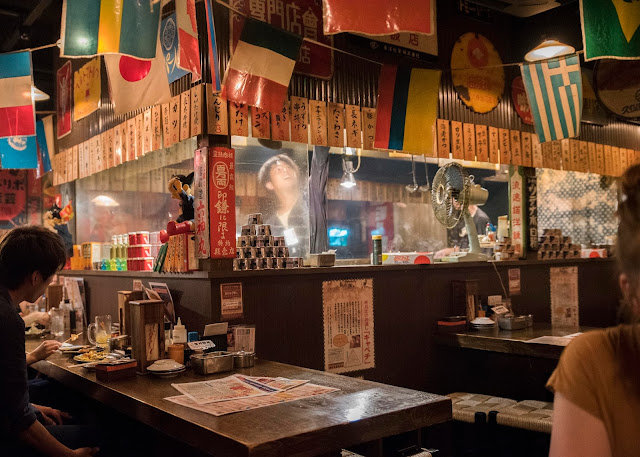 The menu consisted of many small items between $1-$4. To order you would get the attention of the cooks in the center of the restaurant and they would call out to one of the servers to come and take your order. Our bill climbed pretty fast as we tried all sorts of uncommon dishes, but it wasn't too bad considering that there is no tipping in Japan. Probably the most interesting dish was grilled sting ray fin. It came as a plate of uncooked fins and a stone vessel containing hot coals. We each took turns cooking our own fins. They were surprisingly tasty. I will probably have to go back sometime to try more of the interesting things on the menu. 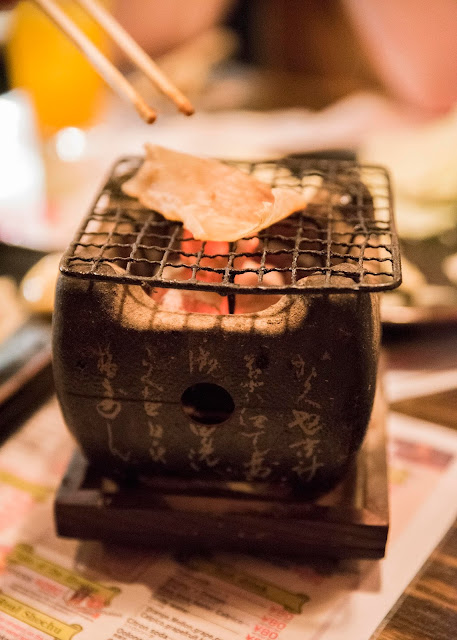 There's more to getting home than making the last train.

In Japan most of the train systems shut down around midnight. When I was living halfway between Osaka and Kyoto, if I made the last train leaving Osaka I could make it home. Though I am currently living in Kyoto, I assumed that if I caught the last train I could still get home. When I got on the last train and listened to the announcements it became clear that there was going to be a problem. The train I was on only went 80% of the way home before stopping for the night. I arrived at Yodo station, 3.5 miles away from home and the conductor kindly informed us that this was the end of the line for the night. 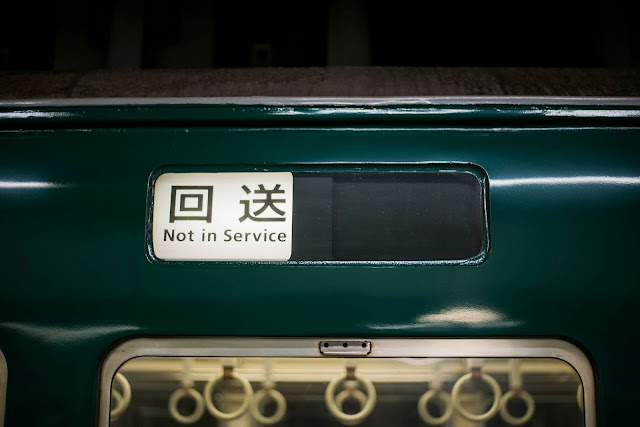 When I got out of the station I saw a line of taxis waiting to take people to where they actually needed to go. I could have  taken one of those, but I was feeling adventurous and considering this is Japan, I felt safe walking home alone. 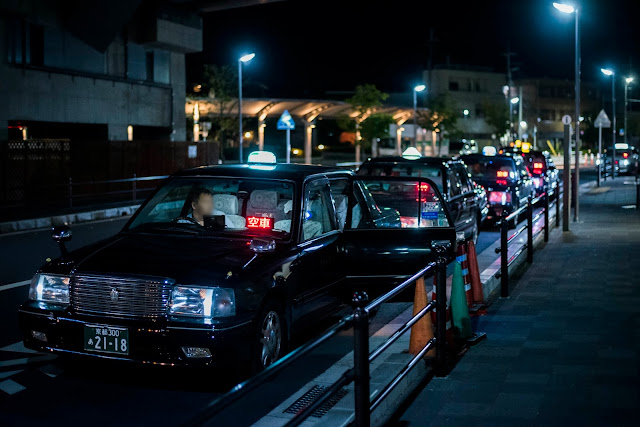 As I started walking I came across a trusty combini (convenience store). Like all combini, this one is open 24/7. Because I was saving ~$30 by not taking a taxi I decided to treat myself and bought two rice balls with filling, a bag of chips and a carton of orange juice. I was ready to complete my journey. 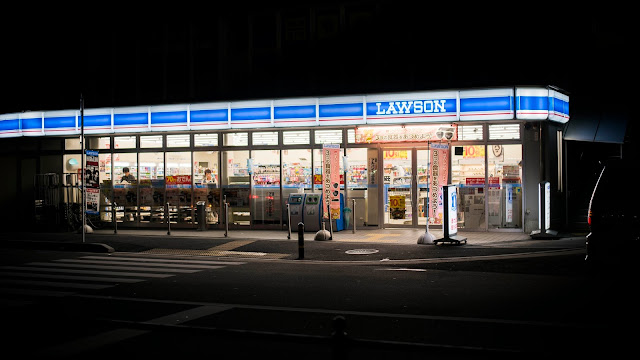 It was a relaxing walk. I only ran into a handful of other people. It was interesting to see a typically busy street completely empty. 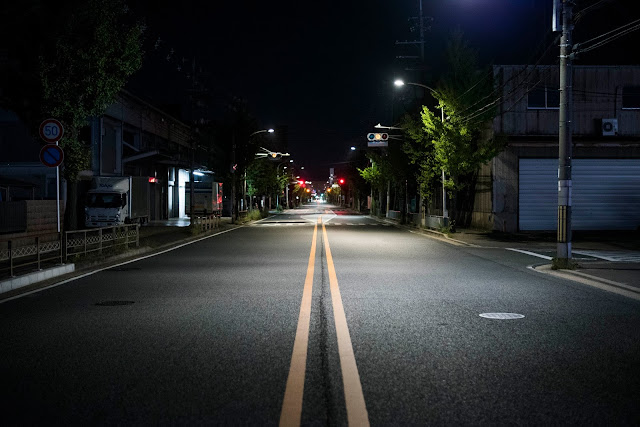 I made it home in about an hour. It was a fun experience, but in the future I will be more aware of when the last train TO KYOTO leaves Osaka.
Posted by Unknown at 4:00 AM No comments:

When I went to Ramen Kazama (the Minneapolis ramen shop) with Japanese people, most of them said they did not like the ramen because it was too oily. Because of this I assumed Japanese ramen would be much thinner and more refined. For the most part this is true, but I recently went with a Japanese friend to a ramen shop in Namba that breaks all the rules. [link] When you order ramen there you have to make 3 choices: how hard you want the noodles, how thick you want the broth, and how many onions you want. At the suggestion of my friend I got regular noodles, the thickest broth and the regular amount of onions. The ramen I received was unbelievable. The thick soup was delicious and super filling. It was almost like eating stew with noodles. When we finished the solid portions of our ramen, there was still a lot of broth left in the bowl. When eating ramen this is a common occurrence so many restaurants, including this one, allow you to order a second helping of noodles, meat and onions. At this point I was completely stuffed but my friend ordered a second helping and was able to make use of the rest of his broth. Next time I am in Namba and very hungry I will definitely visit this shop again. 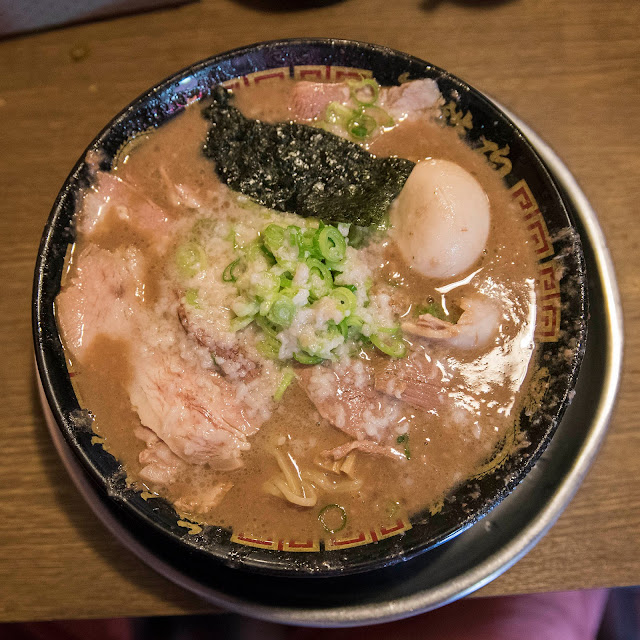 Posted by Unknown at 5:30 AM No comments:

Still not feeling the donuts.

Long time readers of this blog may remember that I used to be a big fan of Mister Donut. Long time readers may also remember that about half way through my previous time in Japan I got sick of Mister Donut and stopped going. I came across another Mister Donut recently and decided to go in for some nostalgia. I got two regular donuts and the donut hole sampler. About half way through my second donut I started to remember why I had gotten sick of the place. The donuts are just too sweet. This may also be a sign that my metabolism is change as I grow older. Unless I go for a long run and get my blood sugar lower I just can't enjoy super sweet things anymore. Honestly, this is probably for the better. No hard feelings Mister Donut.Maybe if you come up with a protein donut I'll stop by again. 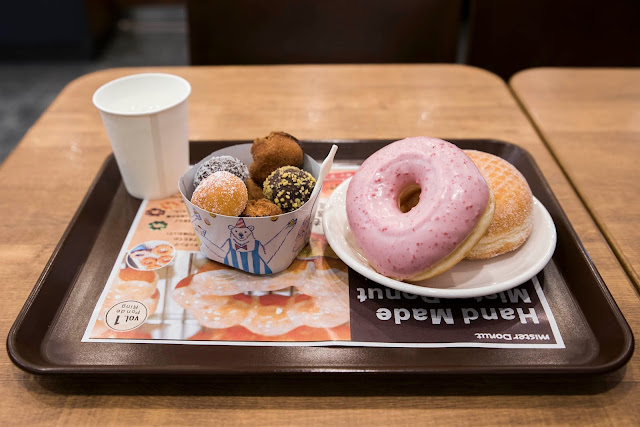 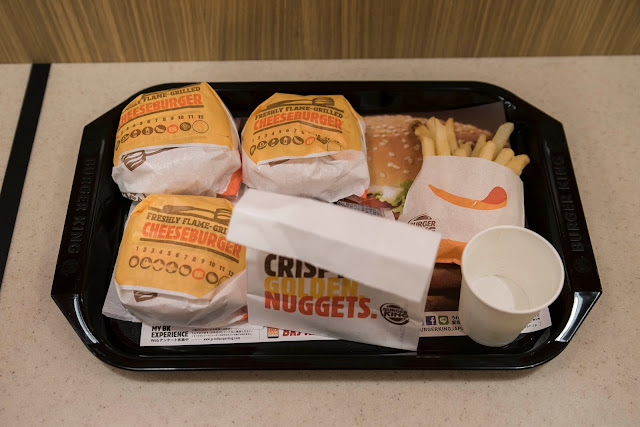 I got hungry wandering around downtown Osaka and was looking for something familiar. I was happy to come across a Burger King. The prices were similar to those in the US and the food tasted about the same. I asked for a water and it was clear they expect you to order a drink. I got a tiny 4oz water cup I had to go and refill over and over to complete my meal. 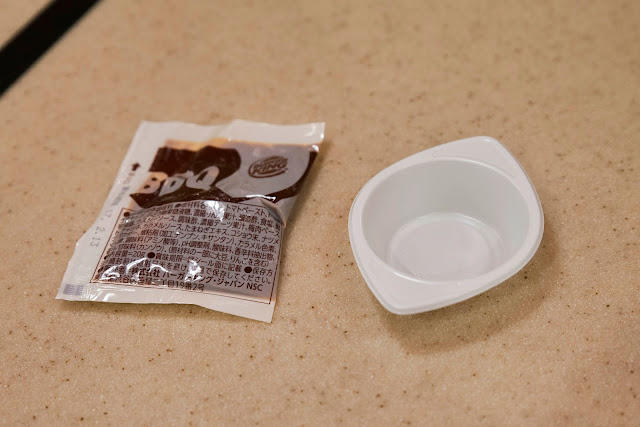 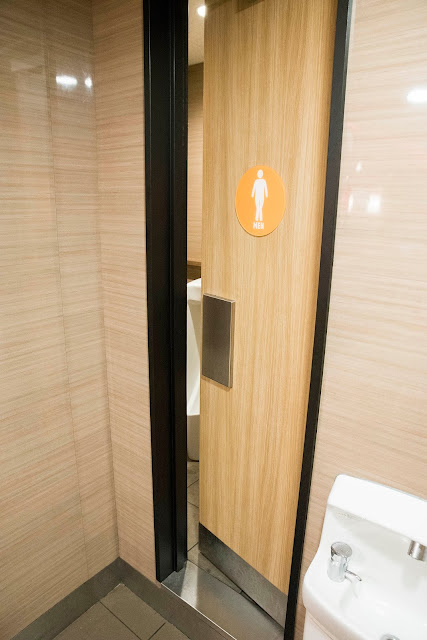 The eating area at the Burger King was relatively large, but the bathroom was tiny. The door was so tiny I wasn't sure if it was a bathroom for a single person. Behind the door was a single urinal and a tiny hallway leading to another tiny door with a lock to a tiny room with a toilet. Very Interesting.

I enjoyed the novelty of this Japanese Burger King, but I probably won't be frequenting it. I've got so many more Japanese restaurants I need to visit first!
Posted by Unknown at 12:27 AM No comments:

A few weeks after the 3 year anniversary of my first trip to Japan I've come back!

I found an amazing deal on a ticket. Last time I payed $1200 for a one way ticket with two layovers.
This time I was able to get a similar ticket for $650. In the end it took 35 hours to get from Minneapolis to Osaka with a 12 hour layover in Taipei, Taiwan. When I arrived in Osaka I was absolutely exhausted, but I feel like in a way the grueling journey made my arrival that much more exciting. I feel like if my flight had be a normal 13 hour nonstop it wouldn't have felt so cathartic when I finally got through immigration and was released into the main terminal of Kansai International Airport, free to go anywhere I want I Japan.

My friend and soon to be roommate Natalie was waiting for me at the airport. I figured I could have made it to her apartment by myself, but I hadn't factored in how exhausted I would be. I am extremely grateful to her for coming to pick me up and allowing me to stay at her apartment until I get my situation here figured out.

After getting some much needed rest, I planned out my next day visiting many of the spots I frequented last time I was here. That day I ended up walking around 20 miles. Even though I was getting tired I felt compelled to see how everything had changed and also stayed the same. So far I've only found one person who knew me from my last time here: Levy, the owner of L&L Bar in downtown Osaka. It felt good to be recognized and I got to chat with him about all that's happened in the last two years.

I also visited several chain restaurants I used to frequent with friends. The food was somewhat nostalgic, but I realize now that it was mostly the people I was with at the time that made these places fun. I still love a good plate of gyoza, but it's not quite the same without my friend TJ. 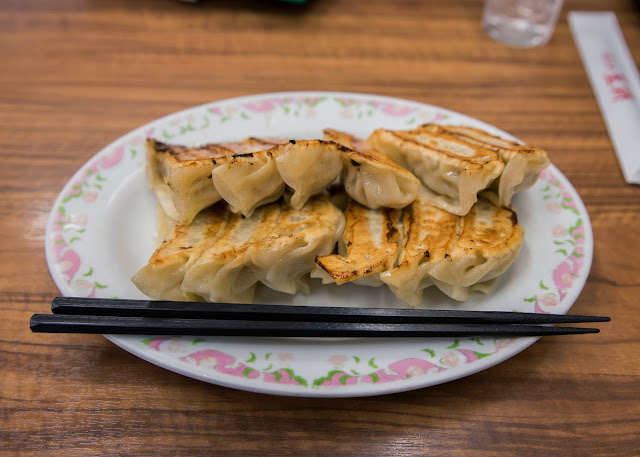 Now that I have gotten a lot of the nostalgia out of the way, I look forward to making new memories as an adult living in Japan. Stay tuned!
Posted by Unknown at 12:09 AM No comments: