As of the last few weeks, I have begun developing a video game with an international team of programmers, artists, and musicians. While that sounds impressive, in reality I'm just working on a game with some friends of mine in the US while I happen to be in Japan. In any case, it feels great to be back into programming after a long hiatus.

At the moment only the physics of the game have been put together, but eventually it will have goals and levels and all those things that actually make a game fun.

The current working version is hosted here and will be updated as we continue to work on the game.

Posted by Unknown at 4:47 AM No comments: 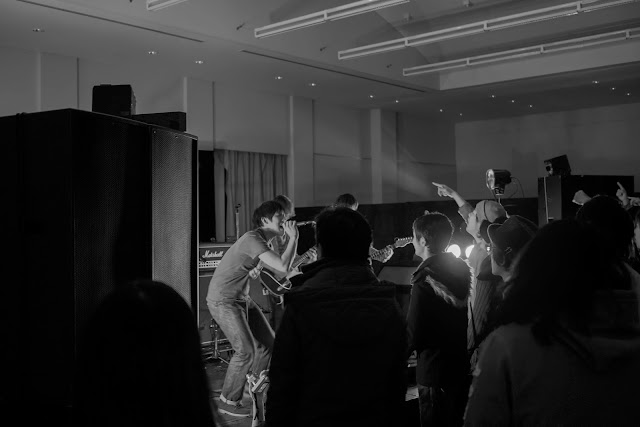 After we got the concert venue setup including the black sheets, I learned that because the space is used by students during the day we would have to tear down a major portion of what we had set up. Some parts of this made sense to me. We moved the lunch tables and chairs back to their original position and moved the soundboard cables out of the way, but some things we were made to take down seemed like a serious waste. We had to take all the sheets down despite the fact that they weren't really in anyone's way. Even more confusing was the fact that we had bothered to put the sheets up the day before the concert despite the fact that we had to tear them down an hour later. In the end we setup and tore down the sheets 4 times going through about 10 rolls of duct tape.

After we had torn the set down for the day I learned of the schedule for the next three days. I had assumed that we would meet maybe 2 hours before the show to set everything up, but it turned out that we were expected to arrive at 8:40am and essentially sit around until setup time. This highlights what I consider a strange insistence on fairness that I have observed in my club experience. The club leaders said that because other students use the room, someone has to be there to watch the clubs property, but to make it fair, everyone has to be in the room the entire day. This seemed incredibly wasteful of people's time though I was allowed to use my computer while I waited around.

While I personally felt that some of the things we were required to do were wasteful, I can see how they contribute to how smoothly everything in Japan runs. My club-mates followed the instructions of the leaders to the letter and no one complained. For example, we were instructed to tape the black sheets on all 4 sides of the windowsill. This ensured that they completely blocked out the windows, but it seemed to me that if we only taped the top and bottom of the sheets we could save 70% of the tape and still block out 99% of the light. I suggested we talk to the club leaders about this and was told that that is simply not how we were told to do the job. In the end, I'm not sure how I feel about this. Certainly there are probably cases where the complete unquestioning compliance of subordinates allows a system to run smoothly, though it seems to me that the discretion of those actually doing the work should be taken into consideration in some situations.

The other teams seemed to have a similar level of discipline and the concert went incredibly smoothly. There was even someone behind the drummer to hand them a new stick if they dropped one. Everyone was busy between sets though those who didn't have a job while the bands were playing seemed to be having fun. The division of fun and work time is a very interesting topic which I will go into next time. I will also describe the extremely stratified relations between older and younger members and past-members of the club. 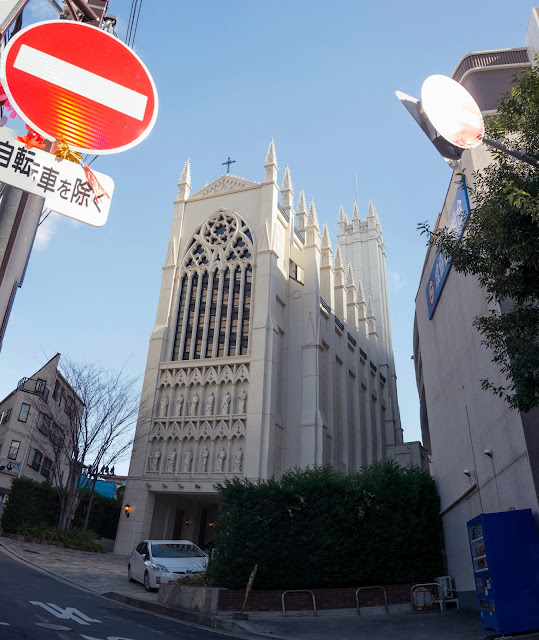 Japan is 1% Christian so from time to time I hear about churches near where I live and go to school. I often saw this church from the train as I commuted to school. I recently walked to the church to see it up close. It's positioned crookedly on a side street surrounded by more typically Japanese homes and businesses. The building is throughly modern inside and I would guess it was built in the last 30 years or so. As with most buildings in Japan, there's basically no parking so I suppose most of the people who attend this church must arrive via train. These churches are much more visible than the far more numerous Buddhist temples and Shinto shrines so I often notice churches in the distance while riding the train.
Posted by Unknown at 6:00 AM No comments:

An Exception to Every Rule 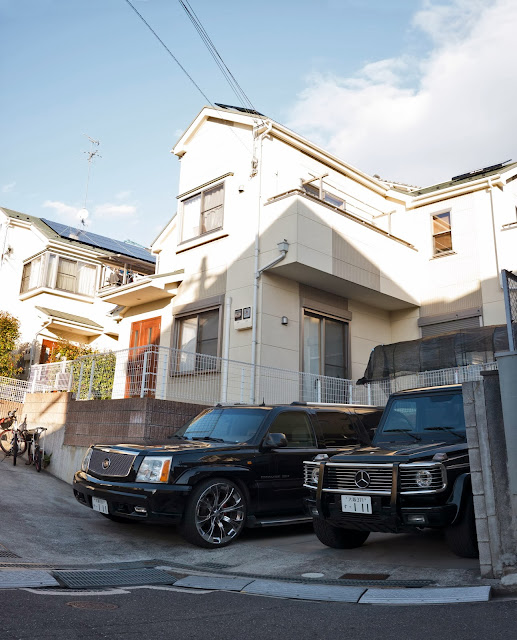 While it can be said that Japanese people typically appreciate simple elegance in their personal belongings, there is still room for individual taste. Every so often I see large western SUVs like these driving around and in addition to being expensive to own and maintain, they also seem to be a pain to drive. These SUVs are almost as wide as some of the supposedly two-way streets that run through many neighborhoods. Western cars are widely regarded as status symbols in Japan despite the fact that they are typically less reliable than their Japanese counterparts.
Posted by Unknown at 6:59 AM No comments: 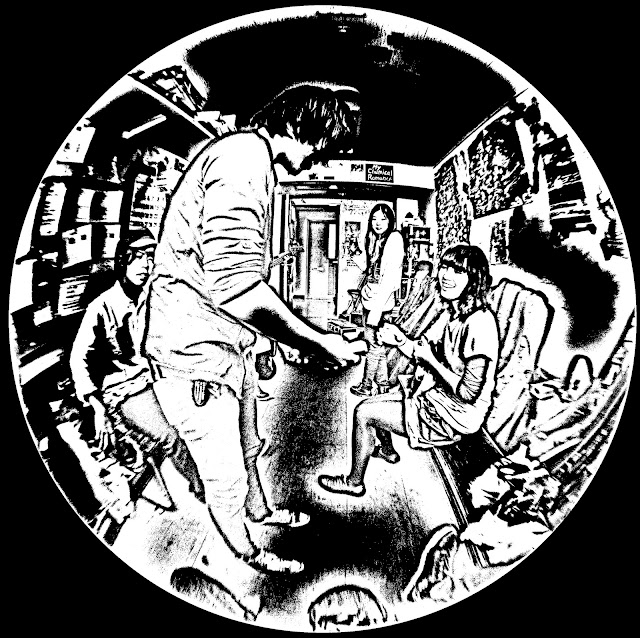 I've had many interesting experiences since joining the Folk Song club on campus. Contrary to it's name, it's really a rock band club. I was in two bands that performed 4 songs each at a recent concert. In addition to practicing with our bands, club members were also expected to join one of several subcommittees that take care of things like lighting, sound, and videography. I joined the videography committee which is also in charge of making decorations for the concerts.

At the first committee meeting two months ago, I was rather confused. I spent 4 hours drawing and coloring christmas decorations and by the end of it I was considering leaving the club as this did not feel like a good use of my time. In addition, the people I was working with who had been very friendly when I joined the club became surprisingly serious and conversation was sparse. When the final bell rang though, everything changed. Even though it was already 8:00PM people weren't rushing to get home, most people stayed around and had suddenly become much more friendly now that their work was done for the day. I was invited to go out to eat with several members and past-members. We had a great time talking about music, language, and culture and for the first time, I felt that I was making real Japanese friends as opposed to participating in a sort of formal cultural exchange. At this point I felt that I would gladly put in the time required to be a member of this club as it meant spending time with these new friends of mine with which I shared quite a bit musically despite growing up in very different cultures.

This drastically changed my perception of the work I was doing in the club. Even though I was getting home at 9:00PM many nights, I was enjoying the people around me and learning practical Japanese from people my age. For the next month we prepared for the concert, creating posters and decorations and practicing our songs. Sometimes it was stressful, but everyone else was working very hard so I felt compelled to persevere.

The concert was divided across 3 days and was located in a large public space where students often eat lunch. We would have to move part of our setup to allow students to use the space during the day which was inconvenient but understandable. The day before the first show we worked from 3 to 8 moving all the equipment into the space and getting it all setup. They had large black sheets to cover all the windows and we spent about an hour taping the sheets to all of the windows.

It was at this point that things started to get, at least from my American perspective, a little strange...
Posted by Unknown at 7:16 AM No comments: 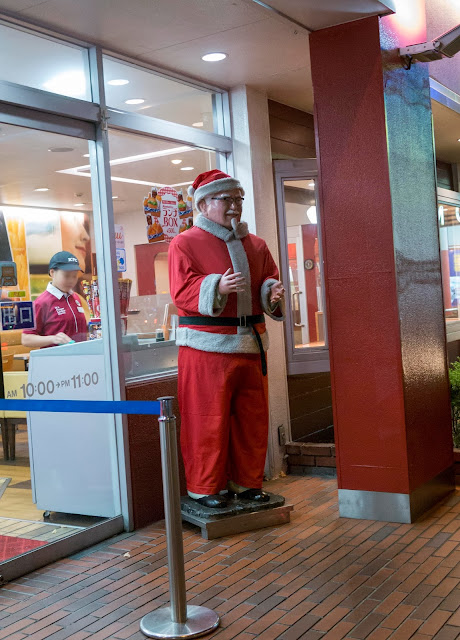 I'm not sure if these exist in the US, but in Japan, all the KFC's have a Colonel Sanders statue outside of their stores and they dress the statues up for various events. People call these statues Colonel Ojisan (Uncle Colonel) and while there are official costumes for times like Christmas, some store employees make their own coverings for the statues to draw more attention to their store. [link]
I actually haven't eaten at a KFC in Japan yet, though I might go there with some American friends of mine for Christmas.

Posted by Unknown at 7:25 AM No comments: